Calling Upon Someone other than Allah

“….Therefore, calling someone from a distance, either for remembrance, desirous of union or anxiety of separation, just like a lover calls his beloved, to give consolation to his heart, is not a sin…… The other sort of calling is where the caller wishes that the called one actually hears the call. In this case, if the caller, through the cleanliness of his heart is seeing the person called spiritually, such a call is permitted. If however, the caller does not see the called one but believes that the called one will receive his message through some means supported by evidence; even then the call is permitted…. From this we get the permission of the Wazifa:” Ya Sheikh Sayed Abdul Qadir Shayn Al Lillah“. If anyone considers that the Sheikh can help with the power he possesses of his own, it will be tending towards Shirk. But if the Sheikh is considered as “Wasila” (means) or these words are uttered with an empty mind considering them to carry “Barakats” (blessings), then there is nothing wrong with them…”

2. A lengthy question was asked to Maulvi Rashid Gangohi regarding a wazifa. The questioner gave many examples from past scholars giving the permissibility of reciting a particular wazifa.

The main question was:

Is it permissible to recite Ya Shaykh Abdal Qadir Jilani Shayn Al Lillah?

“ ………… If someone recites (this wazifa) thinking that Shaykh (Abdal Qadir Gilani) can change or influence things with his own self power ( mutasarrif bil dhat) or Shaykh is the knower of the unseen from his self power( aalim al ghayb bil dhat) , then he ( the recite of the wazifa) is a mushrik. And if he recites with this belief that Allahu ta’ala informs (ittila) the Shaykh (Abdal Qadir Gilani) and the Shaykh can full fill the needs ( haajat barar’ai) from the command of Allah ( bi izni hi ta’ala), he will not be a mushrik. …….”

We know all the Muslims have this belief that only AllaH is the real provider of every need. So it is a grave sin to label Muslims as mushrik.

‘’ Tasarrufat and Karmat (power to change things and power to show miracles) of friends of Allah (awliya Allah) is retained by them even after their death. In fact, the station of sainthood (wilayat) is further elevated after their death as has been recorded by Ibn Abdal Barr.

This is a clear text showing that deobandi elders believed that a dead man can control and influence things even from his grave.

Help me O Nabi! In times of difficulty you are the one to help me!

Note: This has been deleted from the new fabricated version.

“ ( O ! Prophet) you tell those things which are in our heart, you are the one to help those who are in distress”

6. Shah Imdadullah Muhajir Makki (Rh) had a disciple (mureed) whose name was Maulvi Muhammad Ismail. He has written a book called “Karamat-e-Imadadiya”[Miracles of (Haji) Imdadullah ]. This book is published from Kutub Khana Hadi, Deoband.

If the sight is not burdened then read a blood shedding story clashing with the belief of monotheism (Tawheed).

In this very Karamaat-e-Imdadiya it is narrated that a disciple of this very Shah Saheb was travelling by ship and was endangered in a violent rough stormy sea. It was very near to the fierce violent clashing waves to tear its boards into pieces.

Now listen to the incident that occurred thereafter personally from the narrator.

“When he saw that besides death there was no way out then in that hopeless state of condition being alarmed concentrated towards his Peer( spiritual guide) who was “roshan zameer”( could knows the state of the heart) .Which moment can be more than that moment for imdad (help). God is the seer, the hearer and all doer. At that moment the ship was out from danger and all the people were saved.

Here this incident occurred and there the next day Makhdoom Jahan said to his servant, press my back it is very painful. The servant while pressing his back, when he lifted his robe saw that it was bruise and that from most part of the back the skin had been peeled. He asked, what is this and why is the back bruised? He said “nothing”. It was asked again. He remained silent. He asked again for the third time “Hazrat it has been abraded somewhere and you did not even go anywhere”. He said a ship was sinking. In it was your religious brother whose bewailing made me restless that I lifted the ship, supporting it on my back and went forward with it until the servants of lord were saved. It must have got bruised with it and for that reason it is paining. It must not be mentioned.” 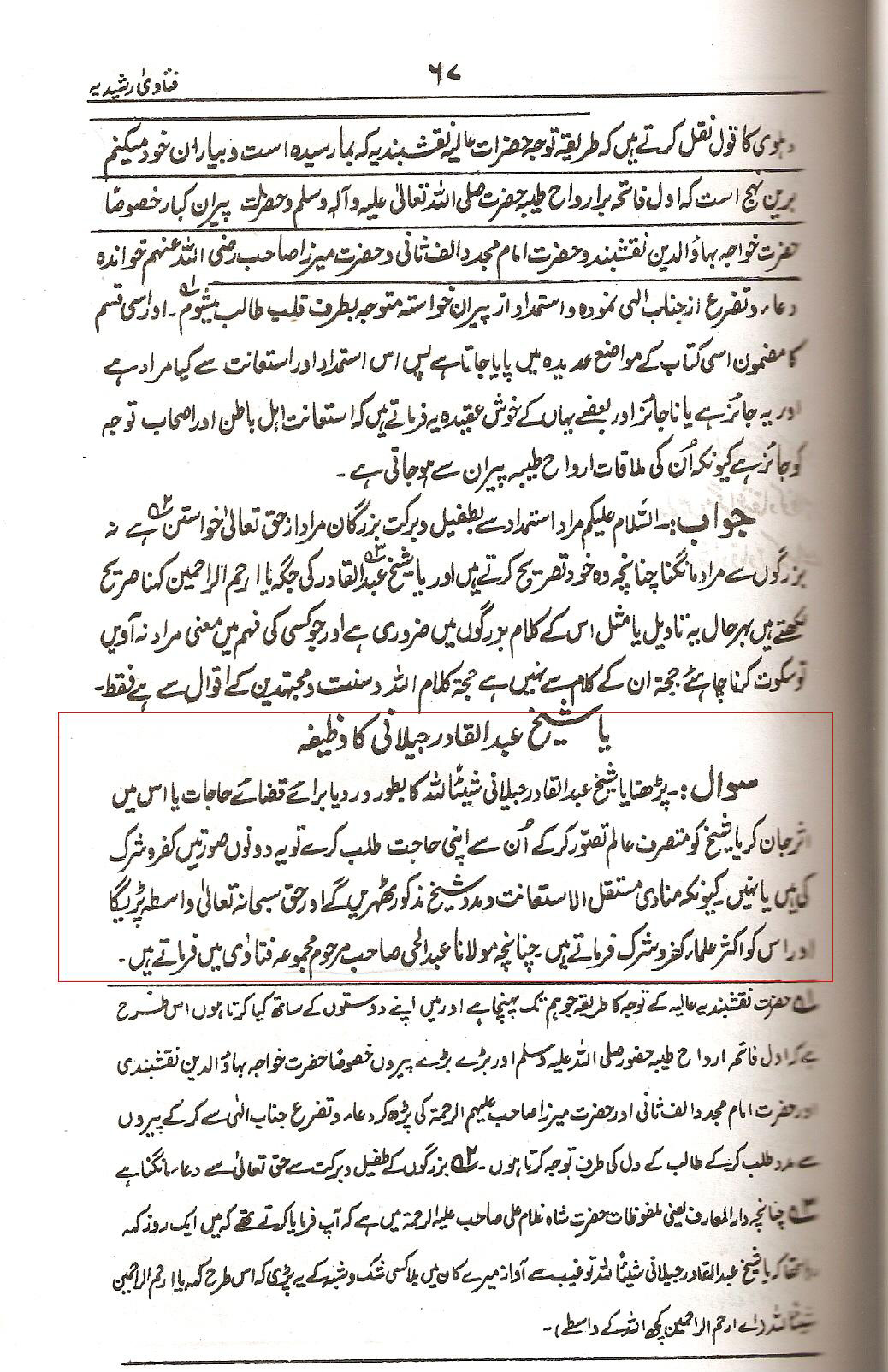