A query on Hadhir Nadhir

“Miqyas-e-Hanafiyat by Muhammad Umar Ichhravi , that “Rasoolullah SallAllahu alaihi wasallam is even omnipresent when a couple has sex”as a matter of fact Umar Ichravi says further, “this is although a different thing that He ( SAAW ) closes his eyes like angels” , yet another wrong belief.”

End of quote from deobandi.

In this short reply we will only examine this deobandi translation along with original quote.

Insha Allah , in future a detailed article on the topic of Hadhir and Nadhir shall be posted.

Note: Kiraman Katibeen are the two angles who record everything we say and do. Each person has these angels on their shoulders. [See Al-Quran: Surah Qaf, ayah 17-18, 50:17-18].

“, yet another wrong belief”.

Readers can see the original Urdu wordings are:

Nowhere does it says that prophet ( sal allahu alayhi wa sallam) closes his eyes. There is no word for ‘eyes’ in the original sentence. The Urdu word is “Nazar” which will translate here as ‘sight” and not eye, because one does not need physical eyes to see spiritual things and a blind man can also have sight ( nazar) of many spiritual states. Similarly a man who has physical eyes ( aankh) can be deprived of many spiritual states.

Hence with this translation the deobandi has shown that he lacks comprehension of this topic. Because Hadhir and Nadhir has nothing to do with physical presence or physical seeing with eyes of the body.( of sal allahu alayhi wa sallam).

It is this lack of comprehension mixed with the disrespect for prophet ( sal allahu alayhi wa sallam) which made this deobandi to make that comment.

The deobandi has failed to understand a simple thing that when we, the people of ahlus sunnah wal jamah, use the term “ Hadhir and Nadhir’ for the prophet [ sal allahu alayhi wa sallam] we do not mean his physical [badni] or bodily [bashari] presence everywhere, rather our standing is that he [ sal allahu alayhi wa sallam] is Hadhir from the nooraniyat and haqeeqat on the reality of things [haqaiq e ashiya].

From the physical and bodily aspect, to view such actions is different when compared with doing mushahida of everything from the eyes of the batin. This is supported by a hadith in sunan Tirmidhi which says: “Ittaqu firasat al momineen fa innahu yanzuroo bi nurlillah “which means: “Beware of the( spiritual) sight of a true believer, for he sees with the Noor of AllaH.” Those things which shariah has prevented from seeing is related with this physical eye [of the body], when it comes to the Noor of AllaH, then the Noor of AllaH is not bounded or answerable (muqallaf) to any shariah. To issue the fatwa on this is to slaughter one’s own iman.

Imam Sharani (Rh ) also mentions about this type of firasat being gifted to pious men on these types of actions. He mentions this in his book Lataif al–Minan Wal-Akhlaq, Vol.2, p.78 [Scan attached]

Hence when the writer affirmed the Hadhir and Nadhir for prophet sal allahu alayhi wa sallam , he did this in view of the hadith , which states:

It is cited in Subki’s Shifa’ al-siqâm fi ziyarat khayr al-anâm
[The Healing of the Sick Concerning the Visit of the Best of Creation],
where he mentions that Bakr ibn Abd Allah al-Mazini reported it, and Ibn al-Jawzi mentions it through Bakr and then again through Anas ibn Malik in the penultimate chapter of the penultimate section of al-Wafa, both huffaz without giving the isnad. However, Ibn al-Jawzi specifies in the introduction of al-Wafa that he only included sound traditions in his bûk. He also mentions the version through Aws ibn Aws: “The actions of human beings are shown to me every Thursday on the night of (i.e. preceding) Friday.” See also FatH al-Bâri 10:415, al-Mundhiri’s Targheeb wa al-Tarheeb 3:343, and Ahmad 4:484.

Success is from AllaH alone. 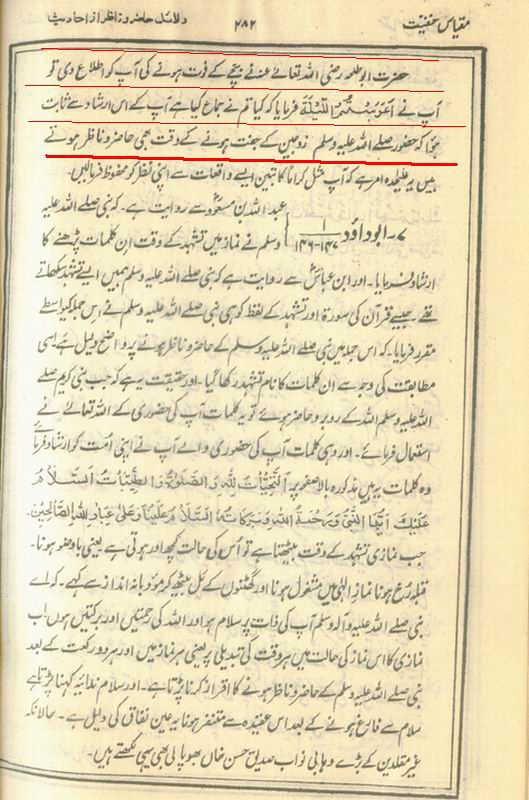 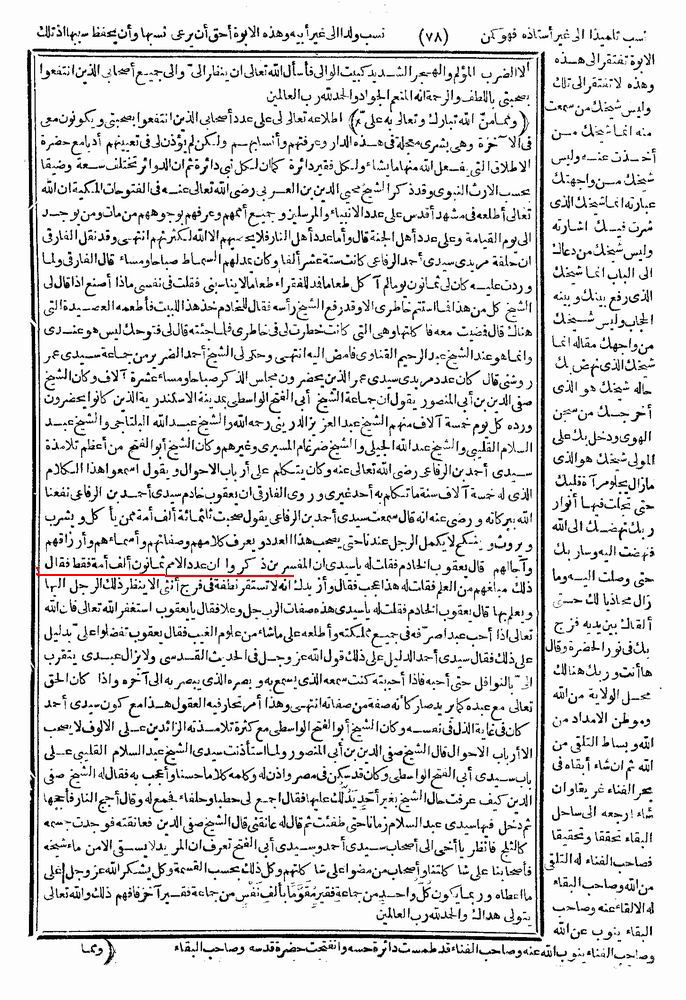