Knowledge of the five things

It must be known that wahabi/ deobandi cult deny quranic verse. It is a central part of their belief that prophet [sal allahu alayhi wa sallam] was not given ANY knowledge of the unseen.

To know the belief of this cult from their own sources, please read here:

Please note that wahabis/ deobandis deny ANY knowledge of the unseen given to prophet.

When the quotes from sunni scholars were presented to these wahabis/deobandis , they changed their stance and now they have a new version which states : “ none of the salaf ( scholars of the first three hundred years) of islam held this view!!

By adding ‘salaf’ in their new version these wahabis/ deobandis are highlighting their stupidity, because the belief of early muslim ( salaf) have been communicated to us by the scholars of the later generation! Hence the belief of later day scholars can be refuted only by these heretics called wahabis/deobandis!

Knowledge of the five things

Verily the knowledge of the Hour is with Allah (alone). It is He Who sends down rain, and He Who knows what is in the wombs. Nor does anyone know what it is that he will earn on the morrow: Nor does anyone know in what land he is to die. Verily with Allah is full knowledge and He is acquainted (with all things). [Sura Luqman (chapter31): verse 34]

I have received the keys to everything (unseen) except the Five (which Allah alone knows.

These five things are:

– Knowledge of what is in the wombs;

– Knowledge of when the Hour will rise;

– Knowledge of what one will gain tomorrow;

– Knowledge of the land in which one will die;

– Knowledge of the time Allah will send rain.

(Hadith of Ibn `Umar in Ahmad and Bukhari.)

1. To know how great sunni scholars understood this verse and hadith please read this article.

Please remember Prophet (sal allahu alayhi wa sallam) said in a hadith “al-‘ulama warithat ul-anbiya,” (Ibn Majah and Tirmidhi) which means “the scholars are the inheritors of the prophets.” Therefore it is difficult to see a way in Islam which allows one to discard scholars and scholarship.

“Allah’s hand is over the group; follow the largest mass, for verily whoever dissents from them departs to hell.

Narrated by al-Hakim and al-Tabari from Ibn `Abbas, and al-Lalika’i in al-Sunna and al-Hakim also narrated it from Ibn `Umar

Hence muslims should follow scholars of the ahlus sunnah wal jamah and stay away from wahabi/ shia/ deobandi scholars.

In order to understand this topic it is essential that one must read the statements posted on the above link. Without reading that no one can comprehend this topic.

[There are five nobody knows except Allah.]

“And his (Rasulallah Sallallahu `Alayhi wa Sallam) saying that nobody knows means that he nobody knows of his own accord; of his own self except Allah. But it should be known that by His own bestowing others also attain this knowledge as is evident amongst us that many have given news of death and that which is in the womb etc.”

2. Ibn Taymiyah has quoted a hadith which says:

‘A’ishah narrated: “When he was on his deathbed, my father said to me: “Verily, you have two brothers and two sisters.” So, I became startled at this, as I only had two brothers and one sister. He referred to his then-pregnant wife, Bint Kharijah, saying: “I see that she is pregnant with a girl,” and that turned out to be exactly the case.” 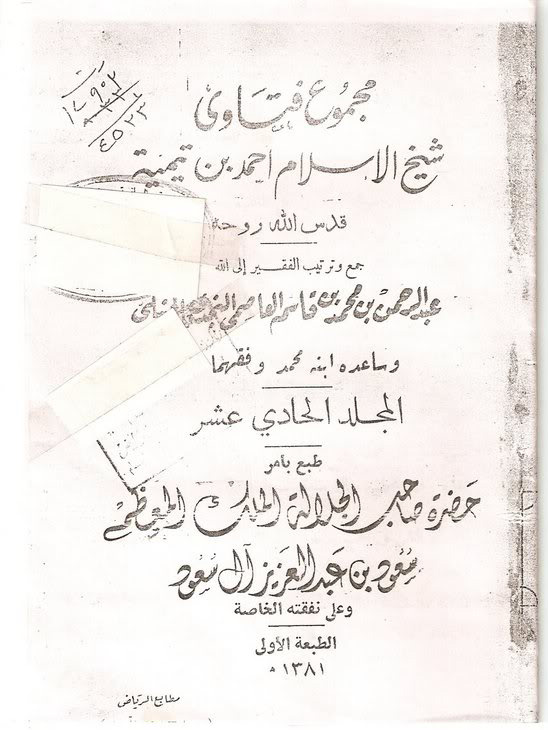 “I have seen some of the Farasah (spiritual visions) of Ibn Taymiyyah which made me wonder, while that which I havent seen is even greater! Ibn Taymiyyah informed his companions that the Tatars would enter the Levant (Sham) in the year 699 AH, and that they would defeat the Islamic armies, and that no killing or enslavement would occur in Damascus; he said all this before the Tatar armies even moved! He also informed the people and the princes in the year 702 AH, when the Tatar army was headed for Damascus, that the Tatar army will be defeated, and victory will be for the Muslims, he swore by Allah 70 times that this would happen, people around him told him to say ‘insha’a Allah’, and he would say Allah will make this happen certainly, so when they criticized him for that, he said: ‘Allah has written in the Lawh Al-Mahfuth (Preserved Tablet) that they will be defeated and that victory is for the Muslims!”

4. Ibn Qayyim also mentions in the same book that his Shaykh, Ibn Taymiyyah, informed him many times of secret and personal matters which he had never told anyone about. He also mentions that Ibn Taymiyyah foretold events occuring in the future, which some of them Ibn Qayyim witnessed himself!

5. Many wahabi/deobandi scholars could know whether a pregnant woman has girl or boy. They could also tell when it will rain and where will a person die.

6. Deobandi/wahabi scholars could be present at more than one place the same time.

1. On the authority of Ibn ‘Umar (Allāh be pleased with them) the Prophet (Allāh bless him and grant him peace) said:

“I was given the keys of all things except the Five: truly Allāh, with Him is the knowledge of the Hour …” to the end of the verse (31:34)” (narrated by Aḥmad and al-Ṭabrānī with an authentic chain)

2. According to the two Ṣaḥīḥs [al-Bukhārī and Muslim] Ḥudhayfah (Allāh be pleased with him) said:

“The Messenger of Allāh (Allāh bless him and grant him peace) stood amongst us in a standing wherein he left nothing up until the Hour but mentioned it; he who preserved it has preserved it, and he who has forgotten it has forgotten it. And indeed a thing from it appears which I had truly forgotten and then I see it and remember it as a man recalls the appearance of a man when he is absent from him and then when he sees him he recognises him.”

The aḥādīth regarding this issue [the Prophet (Allah bless him and grant him peace) conveying the ghayb] is (like) an ocean whose bed is unreachable and whose flow is relentless; and this miracle is from his many miracles known by certainty (from) the continuous reports which reach tawātur for the abundance of reports and the agreement of their meanings upon the conveying of the unseen”

The shaykh (al-Ghumari) then says of the part “except the Five” that the majority believe the Prophet (saw) did not receive the knowledge of the five (1. the hour 2. the womb 3. time of death 4. what will happen tomorrow and 5. when it will rain), although some and most of the later scholars believe he did. He quotes many of the scholars with the latter view, and gives reference to their works.

The shaykh then says:

I say: that which I prefer and am inclined towards is that he (Allāh bless him and grant him peace) did not leave the world until Allāh taught him these five because he does not cease to elevate in knowledge and apprehension every day, rather every moment, and the generality of the aḥādīth testify to this. From these (aḥādīth) is the ḥadīth of Bukhārī on the authority of Asmā bint Abū Bakr that the Prophet (Allāh bless him and grant him peace) praised Allāh and glorified Him, and then said: “there is nothing that I have not seen before but I have seen now at this place of mine, even Paradise and Hell”

And this sermon took place in Madīnah.

From these (ahādīth) is the hadīth of Jābir ibn Samurah who said: “the moon was eclipsed and the Prophet (Allāh bless him and grant him peace) prayed then said:

“I truly saw, by Allāh, from when I stood to pray what you will (all) confront in the matters on this world and the hereafter” (an authentic hadīth, narrated by Ahmad and others)

This is not negated by the ḥadīth in the introduction of “except five” because it was before he was taught these and then he was taught these after that and this is as was(initially) prohibited to prefer him to Mūsā, Yūnus, Ibrāhīm (peace be on them) and then he mentioned that he is the best of the Prophets, and he rebuked one who called him “Sayyid” saying “the (only) Sayyid is Allāh”, and then he narrated that he is the Sayyid of the children of Ādam, and Allāh Most High instructed him in the Qur’ān to say to the disbelievers “I have not the knowledge of the greatest gathering when they dispute” and then he narrated after that that Allāh informed him of their dispute; thus in the ḥadīth of Ibn ‘Abbās, Mu‘ādh and others the Prophet (Allāh bless him and grant him peace) said: “I saw my Lord in the best of form and He said ‘O Muhammad’, I said ‘I am here Lord at Your service’, He said ‘Do you know of what the greatest gathering dispute’, I said ‘I do not know Lord’ and He placed his hand between my shoulders until I felt its coolness in my chest and all things became manifest to me and I knew” (Sunan al-Tirmidhī, Musnad Ahmad and others with various chains; it is an authentic hadīth and I have spoken on it in Qam‘ al-Ashrār ‘an Jarīmat al-Intihār, published with al-Arba‘ūn al-Ghumāriyyah and Ibn Rajab commented on it in a published volume called Ikhtiyār al-Awlā fī Sharhī hadīth Ikhtihām al-Mala’ al-A‘lā)

This ḥadith is one of the proofs of his knowledge of the five also because his statement “all things became manifest to me” is general, rather it is the strongest of the general forms as agreed in Uṣūl.

` Allamahul Bayaan taught him speech that is speech, description of all that hath happened and all that shall come to be.

Under verse three and Four of Sura Rahman, he writes:

“And he is mohammed sal allahu alayhi wa sallam, who is a perfect man ( al insan al kamil ) which means he was given the knowledge of ma kaan wa ma yakoon wa man hu wa kaioon.

With all these quotes from sunni scholars it is clear that many scholars used the term maa kaan wa ma yakoon for prophet ( sal allahu alayhi wa sallam).