Continuing the practice of deception, a deobandi once again tried to twist the meaning of a statement written in his own book.

Qasim Nanotvi al deobandi wrote Tahdhir al Naas, which was published in 1290 AH. Qasim Nanotvi denied the finality of prophethood in this book which gave way to Mirza Ghulam Qadyani to proclaim his false prophet hood. This book has many kufriya statements. For example, it states: “Followers (ummati ) of prophets can surpass prophet when it comes to (good) deeds”.

Deobandis have recently published a fabricated version of this book. It can be seen here

A deobandi recently posted a scan from Mutaliye Barelwiyat, vol 3 , page 300 by Khalid mahmood al deobandi and underlined a few sentences with red. It reads

“none of these (scholars) issued the verdict (fatwa) of kufr upon Qasim Nanotvee, neither did they held him responsible for denying the finality of prophet hood… based on certain sentences ( of qasim nanotvi) they found him guilty of LAZOOM , but they did not burden him with ( the fatwa of) ILTEZAM” 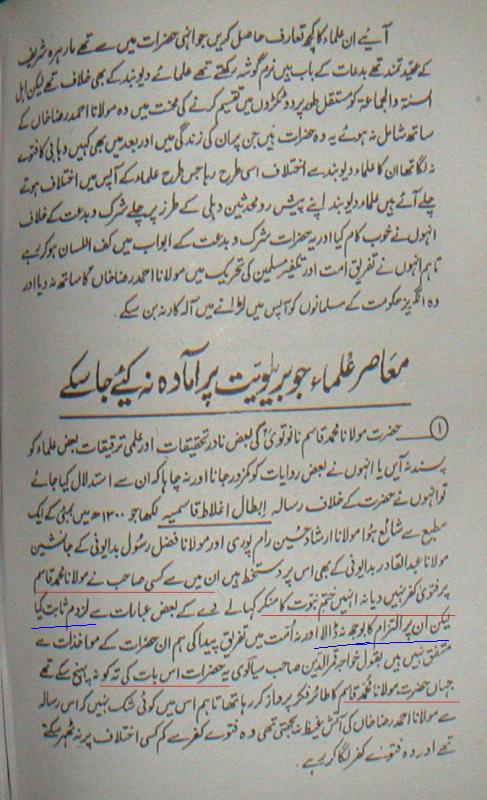 It seems this deobandi is not aware of what LAZOOM and ILTEZAM means or he has tried to deceive the public.

Lazoom and Iltezam are types of kufr as mentioned in the books of fiqh.

For example : If a kufr statement comes out from a muslim’s mouth , it is a case of Lazoom e kufr . This muslim is then told about his kufriya statement . Instead of doing tawba ( repentence) if the individual sticks to his statement then this will be iltezam e kufr.

[Please note there are categories of both these type and conditions for making ruling. Those interested can read books of fiqh.Qadi Iyad al maliki (Rd) has also mentioned rules ( Al shifa)for making judgment on those statements which are clearly kufr. There is no interpretation of clear kufr starements. Also , deobandis should not try to use this methodology for justifying the kufriya statement of their elders like thanvee, gangohi , nanotvi and amnethavee , because this was refuted about hundred years back]

The deobandi translator did not tell that as per Khalid al deobandi , abdual hay lucknawi (rh) did issue the fatwa of lazoom e kufr upon qasim nanotvi.

Khalid deobandi is a habitual fabricator .More about him can be read here.

The sunni scholars issued the fatwa of kufr upon Qasim Nanotvi for more than one reason .Tadhir al nass has statements which shows disrespect to prophet and quran , it also denies finality of prophethood . It seems Khalid deobandi did not study abtaal aghlaath qasmiyah properly

“When Mawlānā Nanotwi wrote Tahzeerun Naas, nobody in the whole of India supported him, except Mawlānā Abdul Hay.”

2 Qasim Nanotvee himself writes in a letter