The Deobandis have added one more feather to their fabricating machine! This time it is the book “ Hayat shah mohammed Ishaq muhaddith dehalvi”. Before we see this fabrication let us see what new lie has come from Deobandi camp.

Some circles tried to create doubts regarding the attribution of Masa’il al-Arba’in and Miat Masa’il towards Muhaddith Muhammad Shah Ishaq Dehlawi [may Allah have mercy on him].”

Since this deobandi has been caught lying at numerous occasions, hekeeps changing topic from Mulla Khabbaz to Shah Ishaq!

But some one has rightly said , one has to lspeak hundred lies to hide one lie!

Just one example of this lie can be seen by reading the links posted below, which will also help in understanding this issue:

“Other camp based their claim on a book called Hayat Shah Ishaq by an individual named Hakim Barkati. Hakim Barkati belongs to Khayrabadi school and is not a hujjah [proof] for us but since he was mentioned by the other camp, it was decided to provide some excerpts from that book.”

“ The maternal grand father of mypaternal grandfather was a NEPHEW ofshah Ismaeel dehalwiand was amongthose who participated in the battle of Balakot. He was uninomusly elected as the leader of Jamaat after this battle! ….. and then he writes further down

It is an open book for the readers to see that why this deobandi has shyed away from mentioning the family relationship of the author withshah Ismaeel dehalvi .Instead he mentions this author to belong to “khairabadi camp” !

Perhaps our deobandi friend knows that the author has gone so much in criticizing Ismaeel dehalvi that at one placehe has also mentioned that NOT EVEN ONE STUDENT took hadith sanad (chain) from Ismaeel dehalvi! He further writes thatwhen shah Abdul Aziz Muhaadith dehalvi (rd) appointedShah Ishaq as his next of kin , ismaeel dehalvee was disappointed and then he took bayyah on the hands of Sayed Ahmed ! ( The wahabi leader)

So our deobandi friend was too shy to mention the family relationshipof the author with shah Ismaeel!

As a side note interested readers would like to know thisFAKE Jiahd of Balakotby reading these scans:

And then our deobandi friend writes

“and is not a hujjah [proof] for us but since he was mentioned by the other camp, it was decided to provide some excerpts from that book”.

This again shows thatthis deobandi has not read this book! Mawlana Hakeem Barkatihas given concrete proof in his book “Hayat Shah Ishaq” that Miat al masail and masail arabeen are not the works of Shah Ishaq. His proof is not based on his personal opinion, but irrefutable proof which can be read here:

Readers can see the manuscript details above which shows that these manuscripts have no sealand no proofof it being written by Shah Ishaq! The issue is crystal clear.

“Publishers of Hayat Shah Ishaq have also attached a booklet at the end titled Irshad-e-Peer. It is a collection of sayings of Shah Ishaq compiled by Mawlana Abdul Rab Hussaini Dehlawi [may Allah have mercy on him], khalifa majaaz of Shah Ishaq, founder of madrassah Abdul Rab in Dehli.”

I congratulate and thank my deobandi friend for pointing out this fabrication!

When the first edition of this book was published in 1412 , the author himself[Hakeem Brkati] sent this to be publishedfrom Shah Abul Khair Academy!See the scans showing proof that author was alive when this was FIRST publishedin 1412. 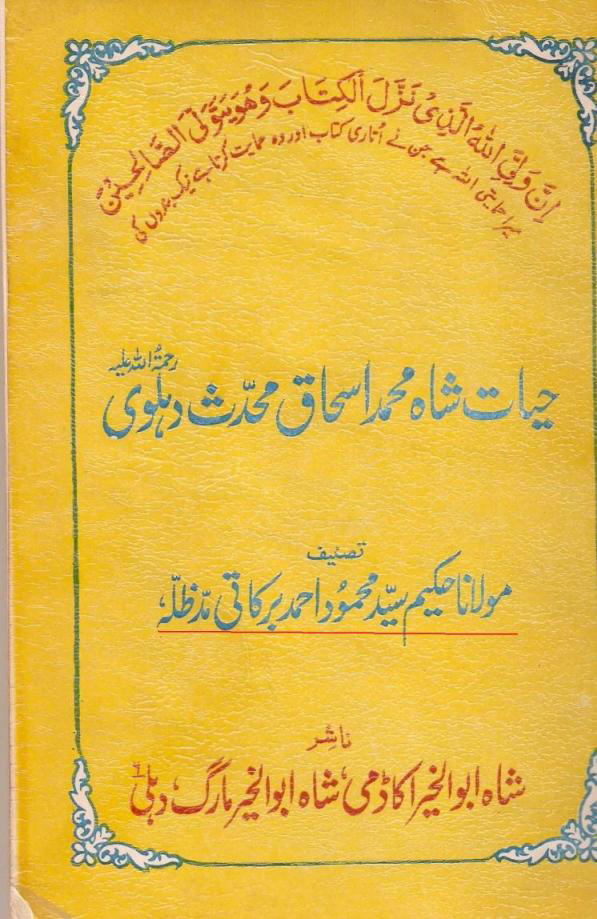 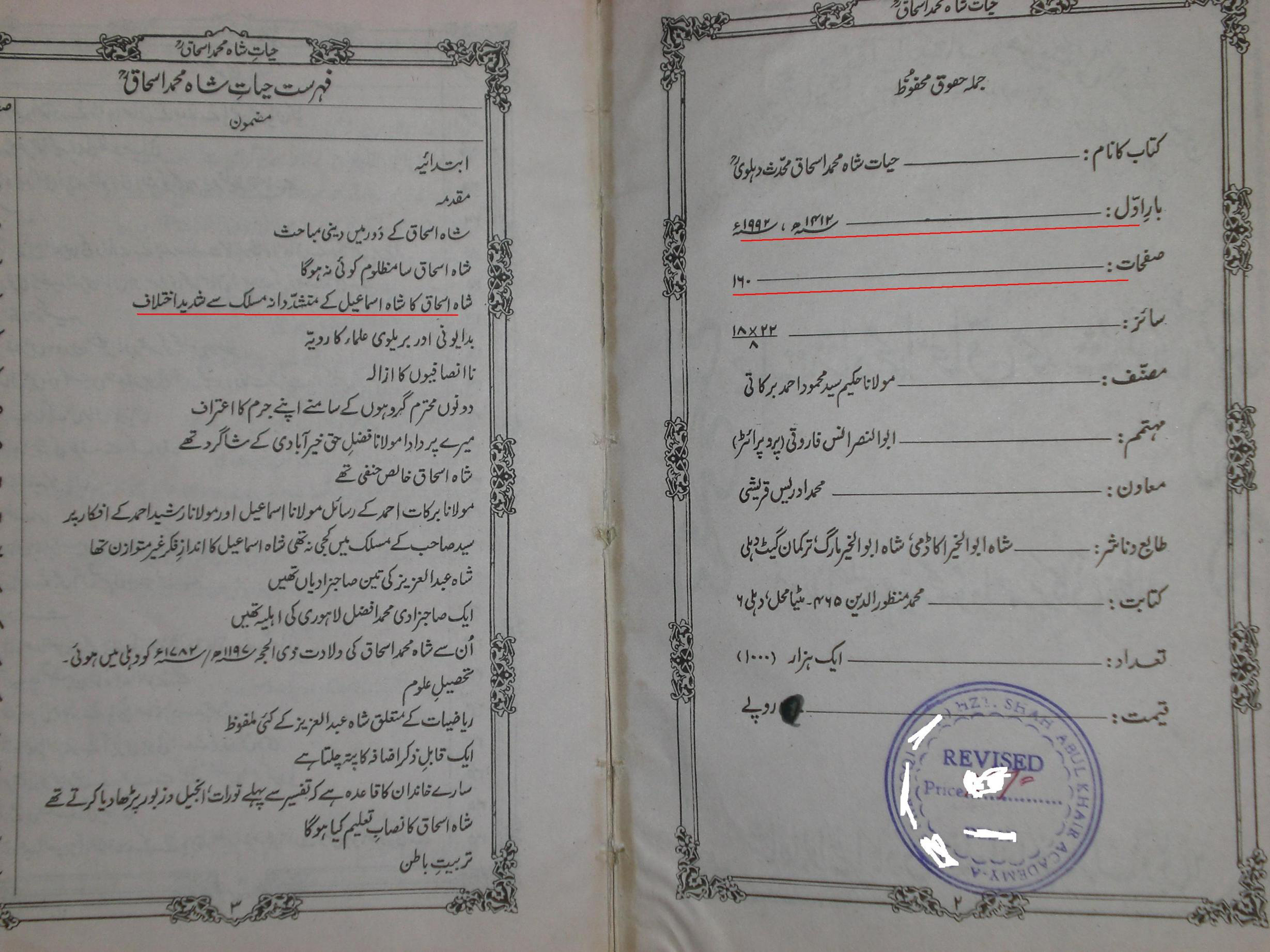 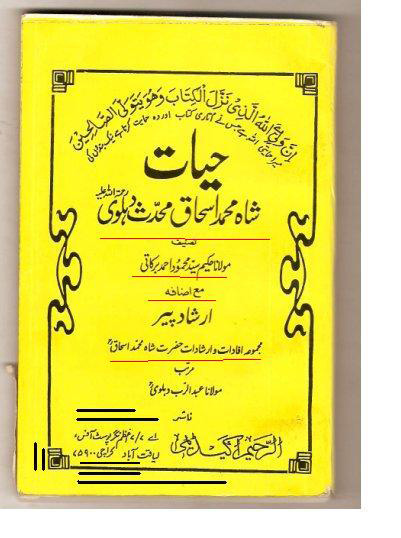 The deobandis from Karanchi added a bookletto this book. This booklet was wriiten by a hardcore wahabi/deobandi whose beleif is that saying Ya Rasul Allah is also shirk!

And why was the booklet added?

Easy! Because the author Mawlana Barkati proved that Miiat Al masailand Masail arabeen were NOT the works of Shah Ishaq!

So this wahabi/ deobandi added his booklet sayingthe opposite!!

“Hakim Barkati accepts this risala to be that of Shah Ishaq. In this risala Shah Ishaq lists Islamic beliefs as well as what is shirk and what are major sins. In there Shah Ishaq divides shirk into 13 types:”

But let us see what Hakim Barkati wrote , which DEOBANDI friend did not translate !! 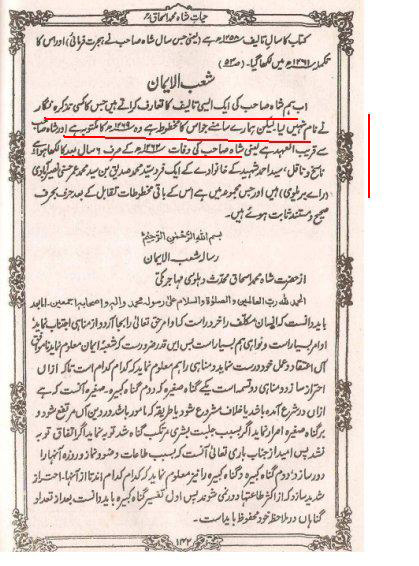 “ Now I will mention thatwork of Shah Isahq which NO ONE has mentioned . But the manuscript of a letterwhich I have it with mewas composed in 1269 AH , that is just six yearsAFTER the death of Shah Ishaq in 1262AH.The Scribe , Siddiq bin Umar Hussein is from the family of Ahmed Saeed . The Collection containing this letter which hasOTHER manuscripts also , when compared were found to match “

Can the readers see ! And our deobandi friend says Hakim Barkati is not a hujjafor him!

A letter whose manuscript was written six years after the death of the author and that too by a wahabi SCRIBEand NO OTHER scholar or historianhas mentioned this work to belong toshah Ishaq , has been whole heartedly accepted by our deobandi friend .

Do we know why?

Because this letter saysNida ( saying Ya Rasul Allah ) is shirk !!

What is also to be noted that Abdul Hayy has also not counted this work from Shah Ishaq in his Nuzhatul Khawatir!

I don’t have words to express my amusement at my deobandi friend! It is the same book Nuzhat al Khawatir which has mentioned that the book Miat al masail was compiled byAhmed ullah and NOT shah Ishaq!!

What is more surprising is that Maulvee Ahmed Ullah himself writes in the preface that he has compiled this book!

I remember what some one has written

More about deobandi cult can be read at these link